Thom and chums play their first, tiny gig of 2008 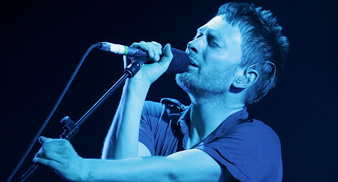 After all their gripping internet shenanigans, Radiohead got back to the business of proper live gigs last night (January 16).

The surprise show was originally scheduled to take place at the Rough Trade East shop in Brick Lane. But following safety concerns, the police moved the gig to the nearby 93 Feet East venue.

Consequently, Radiohead arrived onstage at 10.20pm, two hours later than planned, with a rueful Thom Yorke commenting, “What a fucking day.” As expected, the band played their chart-topping “In Rainbows” album in its entirety, chronologically.

In spite of the day’s stresses, the band appeared in cheerful form, laughing their way through occasional bum notes. Before “Jigsaw Falling Into Place”, though, Yorke commented, “It’s been a very strange day so it’s possible I might have to have a drink at the end of this. I’m trying to cut down, but today seems a bad day to cut down.”

After the final “In Rainbows” song, “Videotape”, Yorke played a solo acoustic version of “Up On The Ladder”, the stand-out track from the bonus discbox CD of “In Rainbows”.

The band then worked through a lengthy encore of old favourites: “You And Whose Army?”, “The National Anthem”, “My Iron Lung” and “The Bends”.

’15 Step’
‘Bodysnatchers’
‘Nude’
‘Weird Fishes/Arpeggi’
‘All I Need’
‘Faust Arp’
‘Reckoner’
‘House Of Cards’
‘Jigsaw Falling Into Place’
‘Videotape’
‘Up On The Ladder’
‘You And Whose Army?’
‘The National Anthem’
‘My Iron Lung’
‘The Bends’