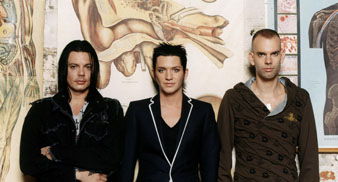 The show previously announced for March 7 sold out within five minutes and the new show will take place the day before on March 6.

The band have re-arranged rehearsals for their South American tour so that they could accomodate disappointed fans with the added UK date.

These two shows will be the last Placebo shows in the UK this year, they will then head off to Mexico, Columbia, Brazil, Chile and Argentina, before they head to the US to play the Coachella Festival.

Tickets for the Coronet go on sale next Tuesday (February 27) and will be limited to two per person.

As previously reported, the band are to release a download version of their “Covers” album through iTunes on March 5.
Tracks include Kate Bush’s “Running Up That Hill” and Pixies “Where Is My Mind.”