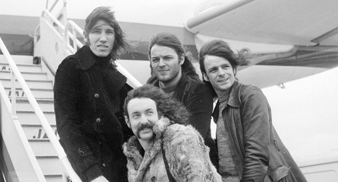 British rock lost one of its finest and most discreet stylists today, with the sad news of Richard Wright’s death. A founder member of Pink Floyd, Wright always stayed scrupulously clear of the spotlight. But his stately keyboard playing added immeasurably to the cosmic grandeur of the band, and his vocal and songwriting collaborations were a critical part of Floyd’s pervasive appeal.

Indeed, it’s a mark of Wright’s discretion that the major battle in Pink Floyd is usually perceived as being between Dave Gilmour and Roger Waters. Wright was actually forced to resign from the band during the recording of The Wall, as his relationship with Waters went awry. He did, however, continue to tour with the band as a hired hand rather than a full-time member.

When Waters left the band, Wright officially rejoined Pink Floyd, and by the time of 1994’s The Division Bell, he was a major contributor alongside Gilmour, co-writing five songs and singing lead on one (“Wearing The Inside Out”).

Wright’s return to prominence within the band on their last album provided a neat career arc. He had, after all, been a huge presence in Pink Floyd from their birth, second only to Syd Barrett as a creative force in their earliest days. He sang lead on “Astronomy Domine” and “Matilda Mother”.

By “The Dark Side Of The Moon”, Wright flourished in his role of musical facilitator for some of the band’s more audacious ideas. Amongst his major songwriting contributions, “The Great Gig In The Sky” and “Us And Them” are obvious stand-outs.

In recent years, he appeared to be firmly part of Dave Gilmour’s camp. While Nick Mason collaborated with both Gilmour and Roger Waters, Wright opted to stay with the guitarist, appearing on his recent “On An Island” and refusing to join Waters and Mason on their tour of “Dark Side. . .”. Like Gilmour, he showed little interest in pursuing a Pink Floyd reunion after the Live 8 show.

Wright was 65 when he died on September 15, 2008, following a battle with cancer. His spokesman said, “The family of Richard Wright, founder member of Pink Floyd, announce with great sadness that Richard died today after a short struggle with cancer. The family have asked that their privacy is respected at this difficult time.”


If you have any memories of Richard or have something you’d like to say about him and his music, email allan_jones@ipcmedia.com