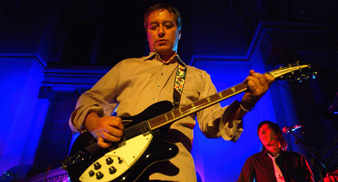 REM‘s Peter Buck has explained why the band are so reluctant to tour their new album ‘Collapse Into Now’.

The record came out on Monday (March 7), but the US veterans have said that fans are unlikely to see them take it on the road.

Now Buck has explained that the nature of album sales strategies and not wanting to “repeat” themselves is the cause of their reluctance.

“We’ll just see what happens,” he told Beatweak. “But it does seem like we’ve toured a lot in the last eight or ten years. To some degree it felt like we’d just been doing kind of the same thing we did last time. You just don’t really want to repeat yourself in that way.”

He added: “In this era in which albums don’t tend to sell well regardless, the lack of touring isn’t a concern. I’m not really sure that touring sells records. What sells records anymore? It seems like less and less people are buying albums, so do what you want.”

Although REM haven’t been gearing up tour plans, they have been working on new video projects. They are set to unveil new videos directed by stars including James Franco and Sam Taylor-Wood to accompany ‘Collapse Into Now’ songs soon.