Paul Simon has “no regrets” over Graceland controversy

Paul Simon has insisted that he was no regrets over the recording of his album Graceland in South Africa. Simon was widely criticised for travelling to the country and making the 1986 with South African musicians, for effectively breaking the cultural boycott of the country due to its racist Apartheid regime. 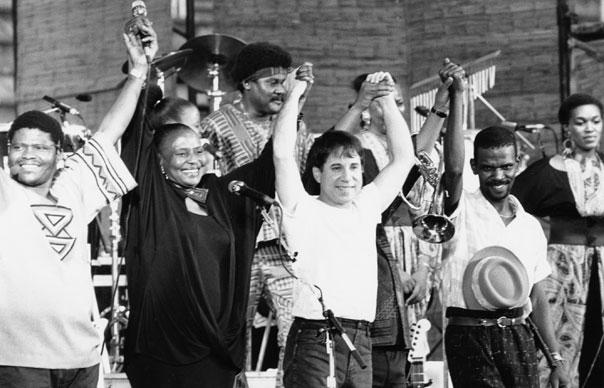 Paul Simon has insisted that he was no regrets over the recording of his album Graceland in South Africa.

Simon was widely criticised for travelling to the country and making the 1986 with South African musicians, for effectively breaking the cultural boycott of the country due to its racist Apartheid regime.

Although the album was a smash hit and is now credited with bringing local music to the a global audience, he was also censured at the time by the African National Congress, who implied that he was supporting the regime. The controversy is documented in new film Under African Skies, which marks the 25th anniversary of the album.

Speaking at a screening as part of the Sundance Festival in London yesterday (April 26), Simon was asked whether he has any regrets of his actions. He replied: “As for regrets, no I don’t have any regrets because it’s a happy ending. Would I have done things differently? Perhaps. If anybody had come to me and said, during the recording or in the 16 months between the recording and the release of the record anybody from the ANC had come and said ‘we don’t want you to do this’, or ‘we wish you would make some sort of statement supporting us’ I would have been very happy to do so.

“But nobody did come to me so I was basically unaware of what was going on, I think perhaps people in the UK were more aware of the cultural boycott, we were not aware. I was aware enough not to play in Sun City with Simon And Garfunkel, but, let me point out the difference. Going to South Africa to perform in front of a segregated audience is to support the Apartheid regime. Going to perform, I mean you could go to perform with South African musicians and if the audience were integrated I think that would have been fine, but that was not the case. Going to record is not the same thing. And it was never specifically declared to be something that shouldn’t be done.

“Besides that, my point in the film I think is this. You supported the cultural boycott, and that’s fine. There’s no reason why athletes should go over and play a team that’s all white in a country that’s mostly black, when the blacks are oppressed there’s no reason for somebody to go and perform and be paid when blacks are not permitted by law to attend, didn’t have the money to attend even if they could. Both of those things are wrong. They didn’t want to have political discussions, I agree. Certainly arms shipments, of course not. But that’s not the analogy, music isn’t tanks, we weren’t there to kill people.”

Simon added that the musicians on Graceland, which included Ladysmith Black Mambazo, were happy to co-operate. He said: “[They] invited me to come. They wanted it, and they had good reason to want it because they wanted their music to get out into the world. I went over there in a way without a lot of that information.”

He was also critical of the ANC’s handling of the situation, saying: “The fact that the musicians thought that it was really important to get that music out, that fact shouldn’t have been ignored by a political party, which is what the ANC is. A political party, no different from Conservatives, Labour, Democrats, Republicans. It happened to be a political party that was fighting for a supremely righteous cause and it was led by a leader who was one of the great teachers of the 20th century, Nelson Mandela. But they are a political party and they have an agenda, and part of their agenda was, ‘you have to ask us’. And I say and I said then, ‘well is that the kind of government that you’re going to be? Why don’t you ask the musicians what they think about this aspect of the cultural boycott, at least hear what somebody has to say, rather than saying ‘you can’t do that and if you do do act that way then you are morally in the wrong’.

“There really wasn’t a discussion, so no I have no regrets about it whatsoever. If you didn’t want your music to go back to South Africa, I could argue both ways on that. I think what you wanted was for the South African Apartheid regime to be overthrown and you want to contribute to the battle. So did I. We offered to perform for the African National Congress after the record came out and was a big hit, we offered to perform, they didn’t want it, they spurned the offer.”

However, Simon admitted that if he had ever been advised not to go and record in South Africa, he would likely not have done it. “Had somebody said to me ‘look we really don’t want you to go there’ I doubt that I would have gone. The only thing I can say in all honesty is that I did not vigorously pursue somebody telling me not to go. I went with the answer that I was hoping to hear which was ‘yes come, yes come and play with us’. I think that that answer and that thought process was never accessed by the ANC. They didn’t confer with their own musicians. And when they went to play in Europe they said ‘go home’.”

Under African Skies is released on June 5. Paul Simon will also be taking Graceland out on the road this year. He plays London’s Hyde Park on July 15.