Paul McCartney to feature on next Gorillaz album?

Beatles legend confirms he has been talking to Damon Albarn 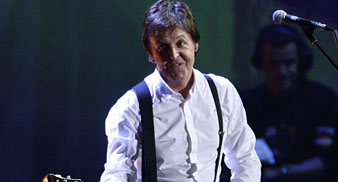 Paul McCartney has hinted that he could be on the verge of collaborating with Gorillaz.

The surprise move would see the former Beatle join the ranks of the likes of Snoop Dogg, Bobby Womack and Lou Reed, who have all appeared alongside Damon Albarn‘s animated band.

McCartney was speaking to TheQuietus.com as he releases reissues of his two solo albums ‘McCartney’ and ‘McCartney II’. He said: “We have kind of talked – nothing serious but I like what they do. It’s got near a couple of times but we never had the time.”

Expanding upon the rumours, a ‘source’ told The Sun: “Damon originally brought up the idea of doing something with Gorillaz at the Q Awards [in 2007] and they have been trying to sort something since. It never worked out on the last album, ‘Plastic Beach’, but things are looking good for something in the future.”

McCartney is currently putting the finishing touches to a score for the New York City Ballet.