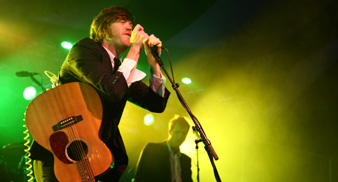 Okkervil River are to launch their second album ‘The Stand Ins’ with an eight video series where musician friends of the band perform covers of songs from the forthcoming release.

‘Stand Ins’ (geddit?) include The New Pornographers‘ Will Sheff and A.C. Newman who appear in the first video, performing an acoustic version of track “Lost Coastlines.”

Bon Iver and David Vandervelde are also guest performers in the series of videos which will appear twice a week for the next month until the album is released on October 13.

Okkervil River will also invite fans to upload their over cover versions of songs from The Stand Ins to be featured on the band’s YouTube channel, www.youtube.com/okkervilriver

Okkervil River are also due to play a short UK tour this November, catch them at: