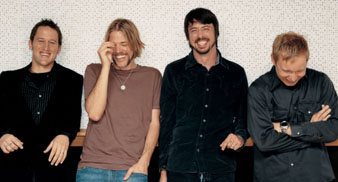 Dave Grohl has revealed that he has recruited his former Nirvana bandmate Krist Novoselic to play on Foo Fighters‘ new album.

“Honestly, it sounds like if Husker Du wrote a four or five minute hit opus and then the Foo Fighters played it,” Grohl told BBC Radio 1 about the Mould track.

He was less explanatory about Novoselic‘s input, simply stating that he “came in the other night and played bass on a song”.

Grohl also said that Butch Vig is producing the album, while the band are also making a movie about the “experience”. Vig last worked with Grohl on Nirvana‘s 1991 album ‘Nevermind’.

“The last month and a half we’ve been in my garage recording totally old school analogue with Butch Vig,” he said. “This whole project has been really cool because I haven’t made a record with Butch in 20 years, almost exactly 20 years.”

Grohl added that the album is Foo Fighters‘ “heaviest yet”, and that the band have now completed seven songs, with another five or six more due to be recorded in due course.

In other Foo Fighters news, the band are set to play Milton Keynes Bowl in July 2011, with tickets going on sale on November 5 at 9am (BST).