The Bad Seeds return to make a bigger noise 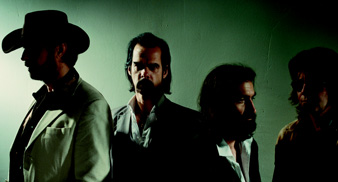 Grinderman is the new demonic side project from Nick Cave and some of his musical Bad Seeds.

Warren Ellis has previously collaborated with Cave on the musical score to 2005 film “The Proposition”.

Grinderman are a free spirited mash-up of a group that has accidentally fallen together, described by themselves as sounding like “an instinctual yawlp”

Within Grinderman, Nick Cave has taken to playing electric guitar, quite unusual for the singer-songwriter. “Having Nick on the guitar changed the whole dynamic,” says Ellis.

That’s just one of the things that makes being in Grinderman more liberating for the musicians. Elliis goes on to say that they “push on relentless” with the musical direction where they would normally refrain.

It sounds like a noisy and original offering from the Bad Seeds.

Grinderman’s debut album is slated for release next March.

The band will play as part of the line-up at The Dirty Three-curated All Tomorrow’s Parties festival next April.

For more information about next year’s ATP – Click here