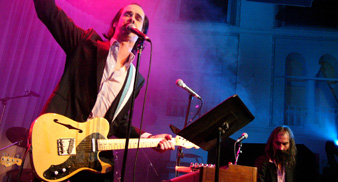 Cave backed by the full electric band played several tracks from their new studio album Dig!!! Lazurus, Dig!!!, including the title track and first single ‘Dig Lazurus Dig!!!’ and the brilliant ‘We Call Upon The Author’.

Cave, suited and booted and in top entertainment mode, made several jokes about the fact the show was being recorded to the 100-strong audience made up of competition winners and invited guests, including singers Beth Orton and Duffy.

Spiritualized also played, performing their Acoustic Mainlines show in the church-like live room, backed once again by the South London Community Gospel Choir and an orchestra. They also used the intimate setting to showcase tracks from their delayed forthcoming album Songs In A & E, including the haunting ‘Death Take A Fiddle’.

An expected collaboration between Nick Cave and Spiritualized’s Jason Pierce during Cave’s set didn’t materialise after all, but Pierce watching in the audience said he was ‘in awe’ of Cave’s show.

Pierce also said that he’s “looking forward to plugging back in” refering to playing Spiritualized’s first electric gig in several years in London this May.

Spiritualized release ‘Songs In A & E’ on May 19 and play a select few electric gigs this May before European festival appearances: