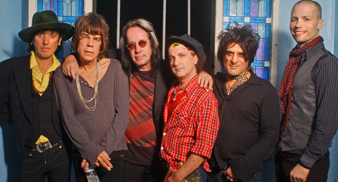 Entitled ‘Cause I Sez So’, the 12 track album is the first the band have recorded with Todd Rudgren since he made their 1973 self-titled debut.

Founder member David Johansen has said: “It was amazing working with Todd again, and I think we were able to evoke the special sound of our first album and drag it by the hair into the present.”

The band are expected to announce a world tour once the album is released on May 4.

The full ‘Cause I Sez So’ track listing is: