More details of our Summer Of Love special issue 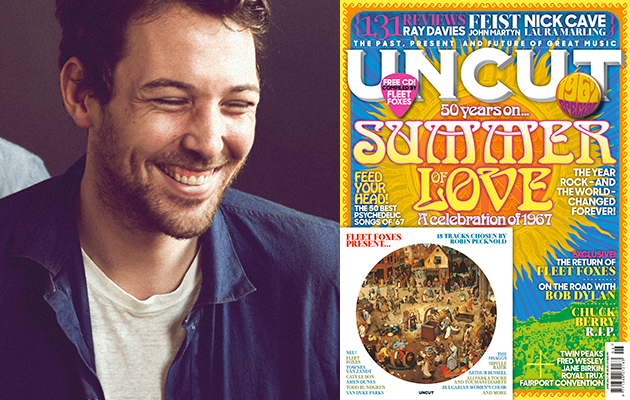 I’ve spent the past few days trying, on and off, to write a review of the new Fleet Foxes album for the next issue of Uncut. “Crack-Up” is a very strong and interesting comeback, and the story behind it is told in the current issue of our mag which, if you haven’t grabbed a copy, is on sale now in the UK.

Robin Pecknold and his bandmates let Stephen Deusner gatecrash their first rehearsal in five years for the story, where he saw them striving to reconcile their old harmonies with a dense new audioworld of found sounds, samples and esoteric new gear. It’s a tale of mature studies, F Scott Fitzgerald, surfing, zen retreats and “mental nightmares” in the studio: “In some ways I was trying to become a different age or a different person making this record, like I was trying to be the person I always wanted to be,” says Pecknold. “There are certain things I don’t feel like I nailed on those old albums, so I wanted to make sure I could try those things, whether it’s a multi-part song or a certain kind of fingerpicking.”

“There are times on the record when you can hear [Pecknold] losing it,” adds his right-hand man, Skyler Skjelset. “He started pounding [the marimba] with mallets and yelling into the mic. I was watching him lose his shit, crying with laughter in the control room.”

There are also some useful footnotes to the Fleet Foxes’ new adventures – Stravinsky! Gnawa! Beowulf! Vanuatu! – and, critically, Robin’s compiled the free CD that comes with the issue*. No Stravinsky, sadly, but it’s a fantastic and eclectic mix that we’re all really proud of. Here’s the tracklist:

3 Townes Van Zandt – For The Sake Of The Song

7 Van Dyke Parks – The All Golden

11 Sibylle Baier – I Lost Something In The Hills

Quick recap of what else is in the issue: a mind-expanding celebration of 1967’s Summer Of Love, 50 years on – Monterey Pop! UFO and beyond! Our Summer Of Love Top 50! An unravelling of the mysteries of Twin Peaks’ music, and a night in Stockholm with Bob Dylan and his frank, unblinkered fans. Plus interviews with Fairport Convention (also celebrating their 50th anniversary), Royal Trux, the great Hailu Mergia, Supertramp’s Roger Hodgson and James Brown’s horniest horn man, Fred Wesley, plus a heavyweight reviews section that includes Feist, Paul Weller, Ray Davies, Perfume Genius, Joan Shelley, Nick Cave & The Bad Seeds, John Martyn, Johnny Cash and me on Alice Coltrane.