Check out the inspiration for 'Midlife: The Beginner's Guide to Blur' here 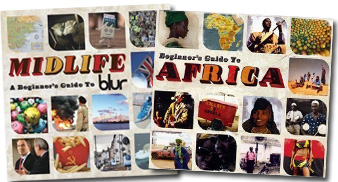 Blur‘s forthcoming ‘best of’ compilation ‘Midlife: The Beginner’s Guide to Blur’ has paid homage to another collection, the three-disc Beginner’s Guide To Africa, which was released in March.

The design of both albums’ covers is the same; apart from the details in the photographic collage, which have been tailored to current Uncut cover stars Blur’s history.

The Beginners Guide To Africa features artists such as Amadou & Mariam, Baaba Maal and Tinariwen – all of whom Blur frontman Damon Albarn has collaborated with as part of the the ongoing Africa Express project – which fuses Western music styles with those from Africa.

Blur, who have recently regrouped to play summer shows, including a headline appearance at Glastonbury Festival are releasing the double-disc Midlife album on June 15.

However, if you’re feeling lucky, there are ten chances to win a copy with Uncut: simply log in and answer the simple question here.