He took a pop at Thanksgiving, too 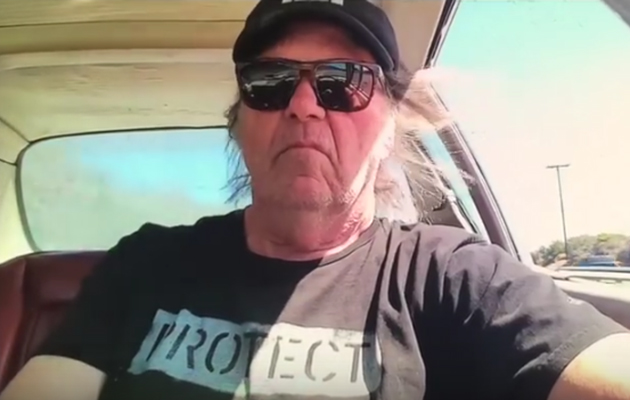 Neil Young has posted a lengthy statement to his official Facebook page that covers subjects ranging from President-elect Donald Trump to the ongoing protests against the controversial construction of the Dakota Access Pipeline.

Young took to his social media page yesterday (November 28) to share his thoughts on a number of the issues facing America at the moment, which he prefaced by talking about the “fictional” history of Thanksgiving.

“It is now widely understood this Thanksgiving story is a fictional history. It was invented to whitewash the vicious genocide wrought upon the native inhabitants of this magnificent continent. Not only did the Europeans try to eradicate native populations, but they made every effort to eviscerate their culture, their language and eliminate them from these coveted lands.”

Young also urged President Barack Obama to step in at the Standing Rock protests, which have been staged against the building of the $3.7bn pipeline – which would transport crude oil from North Dakota to Illinois – and have been fronted by the local Sioux tribe, as well as thousands of Native American supporters from across the continent.

“We are calling upon you, President Barack Obama, to step in and end the violence against the peaceful water protectors at Standing Rock immediately.”

The musician then addressed the fall-out from Trump’s surprise election to the Presidency on November 8, referring to him as “America’s surprise President.”

“The surprise president elect was not the winner of the popular vote, does not have a mandate for the change of ideals envisioned. Keep in mind, close to over two million more people voted for another candidate. Nor is the surprise president the leader of the free world. Two hundred of the worlds nations believe in science, above the profits of the oil, gas and coal industries, and are committed to working together to protect the future from an unchecked climate crisis.

“The surprise president claims he does not believe in climate science nor the threats it presents and his actions and words reflect that claim in tangible and dangerous ways. Do not be intimidated by the surprise presidents’ cabinet appointees as they descend the golden escalator. Those who behave in racist ways are not your leaders. The golden tower is not yours. The White House is your house.”

Meanwhile, Young has also cancelled a tour of Australia and New Zealand due to take place in April.

In a post on their Facebook page, the concert promoters announced on Tuesday that these shows would no longer be going ahead. It did not give a reason for the cancellation.

“Frontier Touring regret to advise that Neil Young will unfortunately no longer be undertaking a 2017 headline tour of Australia and New Zealand as previously ‘teased’ on our social media,” the company said in a post on their Facebook page.

Young is also due to headline the Bluesfest is Byron Bay, Sydney; there is no news as to whether that date has also been cancelled.