It begins as you might imagine, with a guitarist who seems about to play a sputtering solo rather than start a song, a drummer trying to work out what time to keep and, gradually, a band lunging towards a tune: “Oh Susannah”. 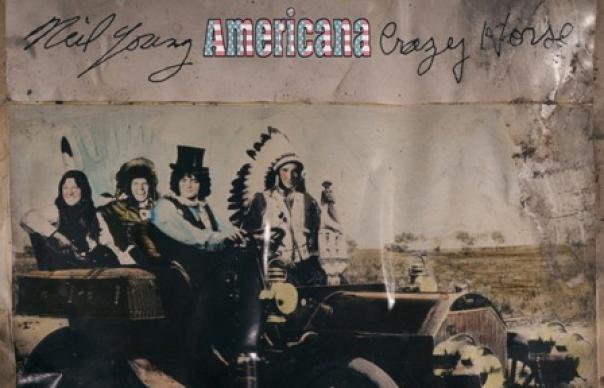 It begins as you might imagine, with a guitarist who seems about to play a sputtering solo rather than start a song, a drummer trying to work out what time to keep and, gradually, a band lunging towards a tune: “Oh Susannah”.

After a minute or so, you can hear Neil Young shout “Oh Susannah” away from his mic, prompting a choir to start chanting the title. It is at this point that Crazy Horse locate the dogged, heroic sense of purpose that has sustained them, on and off, for a good four decades. They’re moving a fraction faster than usual, in truth: as my colleague John Robinson points out, the call-and-response interplay between Young and the backing singers, aligned to the inexorable “good groove” (as Young calls it in the fade-out), make it all oddly resemble Nick Cave & The Bad Seeds’ “Dig Lazarus Dig”.

This is the way “Americana” opens, the latest attempt by Neil Young to variously charm and confound his fans. For those of you who have become exasperated, one way or another, with the path Young has carved this past decade – quixotic, even by his standards – “Americana” may not be quite what you’re looking for. This is undoubtedly the Young who made “Living With War” and “Fork In The Road”, albeit backed by his most heroically truculent rhythm section; all of which is just fine with me.

“Americana” does, of course, feature a reunited Crazy Horse – the first time the full quota have appeared with Young since 2002’s “Goin’ Home”, salvaged from the “Toast” sessions and the one saving grace of his worst album, “Are You Passionate?” (Poncho Sampedro sat out the following year’s “Greendale”). They sound as ragged and capricious and wonderful as ever, well warmed up by the “Horse Back” jam that recently streamed on neilyoung.com.

If you haven’t picked up the backstory, “Americana” finds Young and Crazy Horse tackling a kind of Great American Songbook, gleefully claiming perennials like “This Land Is Your Land”, “Wayfarin’ Stranger” and “Clementine” as their own. As a study in how Neil Young’s musical character is strong enough to overwhelm the most familiar of songs, it’s remarkable.

As a record in its own right, too, it works extremely well. “Americana” might have a subtext of roots-related national pride by virtue of the song selections (a spirited galumph through the doo-wop classic, “Get A Job”, is underpinned – though not remotely overburdened – with contemporary relevance) but the predominant vibe is one of goofy enjoyment. Essentially, it sounds very much like some old friends mucking about in the barn – and it’s pretty hard to think of any other bunch I’d rather hear mucking about.

If there’s something it generally reminds me of in the Crazy Horse back catalogue, today at least, I keep thinking of “Ragged Glory” and the cover of “Farmer John”: “Tom Dula” and “Travel On”, in particular, have a comparable kind of whacked-out vigour, though here the bawled harmonies are propped up by a more orthodox choir, after a fashion (“Living With War” and “Greendale” are antecedents). Young’s solos are relatively brief, unfailingly beautiful. Several times, tracks end with the sound of distant studio laughter.

“Jesus’ Chariot” (aka “She’ll Be Comin’ Round The Mountain”) improbably comes reinvented with a throbbing menace. The standout today, though, is a take on “High Flying Bird” that Young claims in his sleevenotes is based on the version he conceived with The Squires in 1964. Rather than surf-pop, it begins like a slow burn on “Hey Hey, My My” (“Sign Of Love” on “Le Noise” is another possible jump-off point) and turns out to be a gorgeous, wallowing take that illustrates yet again how Young and Crazy Horse can be simultaneously horny-handed yet elegiac.

A lot of pleasure to be had with this one, I think, though even my indulgence has its limits: perhaps hit the stop button before they bludgeon a path through “God Save The Queen”…