The long, long awaited vault material will now NOT be available on CD... 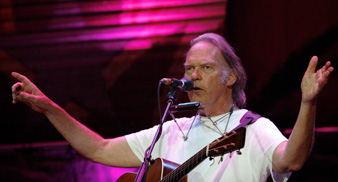 Neil Young‘s long saga with releasing his ‘Archives’ series has taken another turn, with the singer announcing that the latest delay is due to production issues.

Young, speaking to US publication Hollywood Reporter at the premiere of the Crosby, Stills, Nash and Young film ‘Deja Vu’ at the Sundance Film Festival has said that the first volume will now only be presented on the new Blu-Ray format and DVD.

Young said: “I know it’s in technical production now, but it’s only coming out on Blu-ray and DVD. There won’t be CDs. Technology has caught up to what the concept was in the first place [and] how we’re able to actually present it. But there’s no doubt it will come out this year.'”

The multi-disc Archives is expected to feature previously released live sets including ‘Live At Massey Hall’ and ‘Live At The Fillmore East’ as well as never released studio tracks.

Fans of Neil Young have already been vocalising their opinions about the fact that Archives will not feature on CD format, with some accusing the singer as ‘insane’.