The singer goes right back to his debut 1968 album - read the review here! 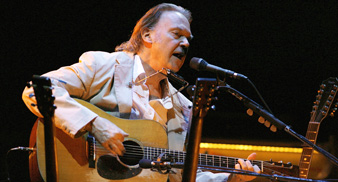 Young, who has promised to unearth unreleased and rarely played live songs from his huge songbook, again mixed up the songs he performed.

Songs not yet played at his first two shows in Edinburgh and London included the first airings of ‘Kansas’, ‘Old King’ and ‘Out On The Weekend.’

His electric set also included ‘The Loner’ from his very first self-titled 1968 album and ‘Roll Another Number’ which was the first time those have been played on these UK dates so far.

Acoustic:
From Hank To Hendrix
Ambulance Blues
Kansas
A Man Needs A Maid
Try
Harvest
After The Gold Rush
Old King
Love Art Blues
Heart Of Gold
Out On The Weekend
Old Man

Electric:
The Loner
Dirty Old Man
Spirit Road
Down By The River
Hey Hey, My My
Roll Another Number
Oh, Lonesome Me
The Believer
Powderfinger
No Hidden Path

Plus you can read Damien Love’s review of Neil’s first UK date in five years at the Edinburgh’s Playhouse on March 2 by clicking here.

If you were at the show use the comments button beneath the reviews to let us know what you thought… and if you’re going to any of the remaining London or Manchester shows, what do you want to see unearthed from the legendary singer’s songbook?