Jim James not well enough to travel for shows next month 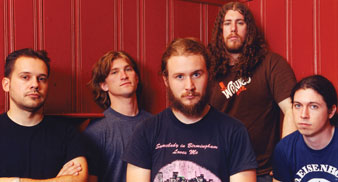 My Morning Jacket have had to cancel their upcoming European tour which was due to begin in Belgium on November 1.

Jim James, who sustained a major torso injury in a fall at a show in Chicago on October 7, has had to follow doctors’ advice to rest.

Posting on the band’s website after the accident, the band explained how James fell during the show, saying: “Jim went to get closer to the audience on his side of the stage, and as he moved forward to step onto the sub-woofer the lights darkened, and he inadvertently stepped off the stage. Upon falling, he suffered traumatic injuries to his torso, and was immediately taken to the hospital.”

The band’s UK headline shows had been due to begin on November 12 with a show at London Brixton Academy, co-headlined by The Black Keys, but the following press statement has just been released:

“It is with great regret that we have to announce the cancellation of My Morning Jacket’s up-coming tour to Europe due to injuries suffered by JimJames in Iowa City. For the fans who have purchased tickets, we would like to extend our gratitude for your support and understanding.

Our hope was to merely postpone the tour, but as our scheduling does not allow that to happen in the immediate future, we feel it is best to cancel this tour inhopes of re-scheduling at some point. We would also like to say ‘thank you’ to all the fans who have reached out to Jim with their well-wishes as we all hope for his speedy and full recovery.”

MMJ had been due to play the following venues, contact box offices for details about refunds: