Mumford & Sons to perform with Bob Dylan at Grammys

UK folk band will duet with legend on Sunday night 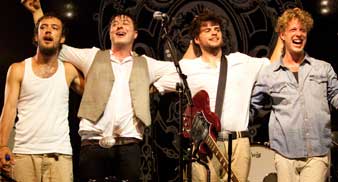 Mumford & Sons will perform with Bob Dylan at this year’s Grammy Awards ceremony.

The band had previously performed with The Kinks‘ Ray Davies (watch video below), and are now set to hook up with the folk legend at Sunday’s (February 13) ceremony at the Los Angeles Staples Center.

They will perform with him as well as North Carolina band The Avett Brothers for an as-yet unannounced number, and will also play their song ‘The Cave’.

The band are nominated in the Best Rock Song category for their debut single ‘Little Lion Man’ and in the Best New Artist category.

Also at the ceremony Eminem and Dr Dre will team up to debut a song from Dre‘s forthcoming album ‘Detox’. It will be the first time the pair have performed together on TV in over a decade.

Lady Gaga and Arcade Fire will also be performing at the ceremony.