Tom Waits, Pink Floyd, Tom Petty and Teenage Fanclub are all in the new issue 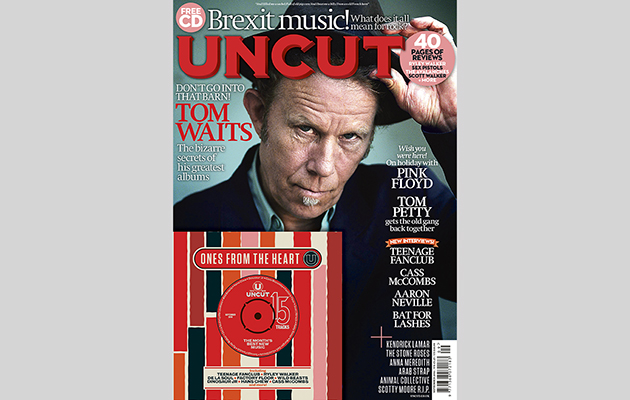 Tom Waits, Pink Floyd, Tom Petty and Teenage Fanclub all feature in the new issue of Uncut, dated September 2016 – which is now in UK shops and available to buy digitally.

Waits is on the cover, and inside there’s an access-all-areas investigation into the singer-songwriter’s world, as a motley horde of his closest collaborators reveal how 10 classic albums were made. How should a clarinet sound? “Like a fat guy wearing a little hat.”

“Tom always played piano as he talked,” explains Bones Howe, “his hands dancing on the keys.”

In our special feature on the Balearics, Pink Floyd‘s Nick Mason, along with Robert Wyatt and many other artists, retrace their steps to the inspirational Spanish islands. “It was a magical empty island with incredible skies,” says Hipgnosis’ Aubrey Powell of the island of Formentera. “I was hugely influenced.”

Elsewhere, Uncut heads to New York to meet Tom Petty and his old band Mudcrutch, reconvened once again and keen to prove they “were better than anyone else”.

On the eve of the release of their brilliant new album, Here, Teenage Fanclub welcome us to Glasgow to reveal the secrets of their enduring brilliance.

Compelling American singer-songwriter Cass McCombs also talks music, the sacred lowlife, the tarot and his fantastic new album Mangy Love – “Have any of the wrong things made it onto a record? It’s mostly wrong things…”

Meanwhile, Bat For Lashes takes us through her albums so far, De La Soul reveal how they made their classic song “The Magic Number”, and soul great Aaron Neville answers your questions about Ray Charles, heroin and the Grateful Dead.

Elsewhere, we meet Anna Meredith, investigate Lord Buckley, look into Brexit’s possible impacts on music, and hear from Animal Collective‘s Avey Tare about the music that has shaped his life.

Live, we catch Kendrick Lamar and Kamasi Washington, and The Stone Roses, while Tim Burgess and David Bowie feature on our books page, and Bob Dylan appears in our DVD and film reviews.

The new Uncut, dated September 2016: in UK shops and available to buy digitally.