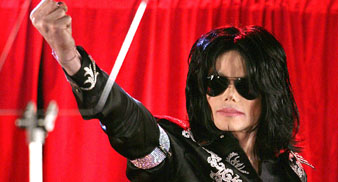 Michael Jackson has extended his London O2 Arena residency to 50 live dates, it was announced on Thursday (March 12).

The singer, who appeared at a press conference at the O2 Arena to announce the shows last week (March 5), will now perform his “final shows” in London from July 8 to February 24, 2010.

Tickets went on presale to fans who registered at michaeljackson.com on Wednesday (March 11), and an estimated 360,000 tickets for the 20,000 capacity London Arena have been sold so far. If Jackson sells out the newly announced shows too, he will have sold a million tickets.

The ‘This Is It’ ‘tour’ is said by the concert’s promoters, AEG Live, to be the fastest selling live show of all time, with 33 tickets sold every minute since they went on sale.

Tickets for the London shows will go on general sale to the public on Friday (March 13) although it is still possible to get a presale registration code.

Full details of Michael Jackson’s This Is It live dates are available here:michaeljackson.com/tickets