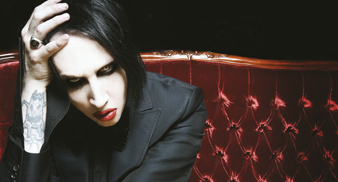 Marilyn Manson has announced four UK shows happening in December, as part of his Winter tour.

The summer will see Manson co-headline a 25-date US tour with other metal giants Slayer, starting on on July 25 in Florida.

Manson has also revealed his plans for his directorial debut for his long-awaited horror film ‘Phantasmagoria: The Vision of Lewis Carroll’. Filming begins later this year, and the confirmed cast so far includes Lily Cole, Tilda Swinton and Evan Rachel Wood.

Tickets for the UK shows go on general onsale this Friday (August 10) at 9am.

Venues/ dates are as follows:

More information about the shows, Manson’s new album and the movie are available from his official website herewww.marilynmanson.com