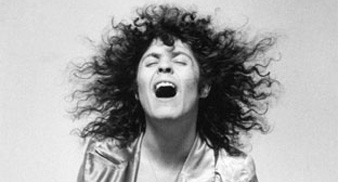 The family of the late T. Rex frontman, Marc Bolan, have opened a school for orphaned children in Makeni, Sierra Leone.

His former partner, soul singer Gloria Jones – who survived the 1977 car crash which left Bolan dead – has founded the Marc Bolan School of Music and Film. The school hopes to educate 100 students who have been orphaned by the civil war in West Africa, or who have been rescued from blood diamond mines.

With her husband Chris Mitchell she set up a HIV charity in the mid-1990s and now, with assistance from Jed Dmochowski – the frontman of a Marc Bolan tribute band – is raising money for the new school, which plans to “heal through music”, reports The Independent.

Dmochowski has been playing fundraising shows for the school, in order for them to buy musical instruments, as well as flying out to Makeni to perform for the students. He said: “The children are getting to know more of Marc’s music and will be playing his songs. But Gloria really wants them to be inspired by Marc’s energy and vision and to develop their natural talent.”