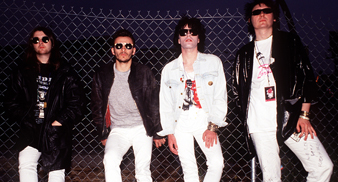 Edwards disappeared in February 1995, after having been last seen in London. His car was later found abandoned in a car park at Wales’ Severn Bridge.

No evidence of his later whereabouts has been uncovered, however, despite numerous alleged sightings around the world in the last 14 years.

The lyricist’s parents, Graham and Sherry Edwards, have resisted declaring their son ‘presumed dead’ in the past.

Edwards‘ presence still looms large in the band he founded – Manic Street Preachers are currently recording an album using only his unused lyrics with Nirvana, Pixies and PJ Harvey producer Steve Albini, and still pay his share of their royalties into a bank account.