The band are joined by Nina Persson for Glastonbury show 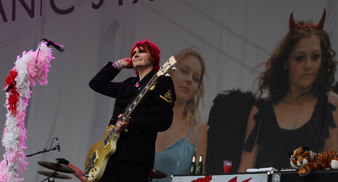 Just before playing debut single ‘Motown Junk’ towards the end of their set, singer James Dean Bradfield said emotionally: “We first played Glastonbury in 1994. One of us was hammered before the gig, during the gig and after the gig. That man was Mr Richey James. This one is for him.”

The trio were also joined onstage by Cardigans songstress Nina Persson, who reprised her role on the Manics recent number two charting single ‘Your Love Alone Is Not Enough.

Playing for just over an hour, the Manics treated fans to classic tracks from the early 90s such as ‘Faster’, ‘From Despair To Where’ and ‘La Tristesse Durera’ – as well as from their new LP ‘Send Away The Tigers.’

With regard to the typical English festival weather, James Dean Bradfield quipped: “If it’s any comfort we did two gigs in Germany and it was pissing down there as well.”

Check out more festival news on the new Uncut Festivals Blog here – we’ve been at Glastonbury and Knowsley Hall all this weekendwww.uncut.co.uk/blog/index.php?blog=10&title=

The Manics played the following: