Band also remind fans to get down for 7.30pm at Saturday's (December 17) show 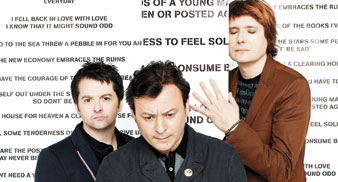 Manic Street Preachers are still arguing over the running order of their setlist for Saturday’s (December 17) one-off London O2 Arena gig, according to bassist Nicky Wire.

The Welsh band are set to play all 38 of their singles at the special Christmas gig, which kicks off at 7.30pm and will be split into two halves with an interval.

Speaking to NME, Wire urged fans to get down early to the show, commenting: “If you don’t want to miss ‘Love’s Sweet Exile’, ‘Motorcycle Emptiness’ or ‘Revol’, you better get there on time.”

He said that the band had endured a “tense” week coming up with the final running order, explaining: “It’s just been one of those weeks where you know you’re going to be falling out with each other – but we’ve known each other 35 years so it’s pointless having a row now. It’s been really hard to put together because everyone’s got their own opinions on how to play things.”

Wire added: “We are 42, 43 now, so unfortunately it’s not like we can just jump onstage and thrash through it like we would have done, 10 or 20 years ago.”

The band, who released their singles compilation ‘National Treasures’ in October, have indicated that they’re planning to go away for at least two years after the gig.

To check the availability of [url=http://www.seetickets.com/see/event.asp?artist=Manic+Street+Preachers&filler1=see&filler3=id1nmestory] Manic Street Preachers tickets[/url] and get all the latest listings, go to [url=http://www.nme.com/gigs]NME.COM/TICKETS[/url] now, or call 0871 230 1094.