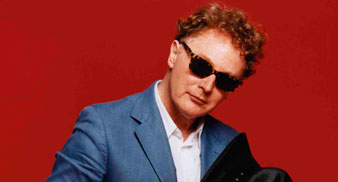 The punk impresario passed away on April 8 in Switzerland after suffering from cancer.

Before a ceremony at Highgate ceremony, a funeral procession took place through the streets of Camden, north London, with the streets lined up hundreds of mourners paying their respect.

McClaren‘s coffin, stencilled with the legend “Too fast to live too young to die”, was drawn by four black horses in full funeral regalia, while a car in front of the coffin was filled with flowers spelling out “Cash from chaos”. Following the hearse –the back of which carried an anarchy symbol made of red and white roses – were four cars and a dark green Routemaster bus, its destination billed as “Nowhere”.

Meanwhile, a soundsystem on the back of the bus, which full of revelling mourners, played tracks including Sid Vicious‘ version of ‘My Way’ as well as the cover of ‘Rock Around The Clock’ from ‘The Great Rock ‘N’ Roll Swindle’ movie. Leather-clad punks jumped on the back of the vehicle and sang along as it made its way down the high street.

Ahead of the ceremony the manager’s family had encouraged the public to take part in a “minute of mayhem” at noon encouraging people to stop and play “their favourite records”.

Speaking to [url=http://www.nme.com/news/malcolm-mclaren/50578]NME.COM[/url] about the funeral, Ben Westwood – son of Vivienne, who was McLaren‘s partner in the 70s – remembered him fondly.

“He was a really good friend. He was a really nice person. My brother [Joseph Corre, McLaren‘s son with Vivienne Westwood] said ‘travel well’ to him when he died. And that’s what I’d like to say as well. Travel well Malcolm, you’re a star.”

Westwood added that he hopes McLaren‘s grave at Highgate Cemetery becomes a shrine in the future. “He’s [to be] buried in Highgate Cemetery, and I hope his grave becomes like Jim Morrison‘s or Serge Gainsburg‘s and all those others.”