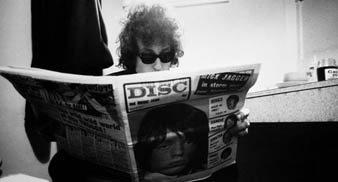 The first UK exhibition of previously unseen photographs of Bob Dylan will open in May.

“Bob Dylan: Real Moments” at Birmingham’s Snap Gallery contains some of the most memorable and important photographs of Dylan ever created including the famous portrait of him surrounded by street kids in a Liverpool doorway.

The portraits, on show from May 3, were taken by legendary rock photographer, Barry Feinstein, who followed Dylan on the European leg of his incendiary 1966 tour.

“I don’t feel that much needs explaining as my photographs speak for themselves,” said Feinstein. “I don’t really like stand-up portraits, there’s nothing there, no life, no feeling. I was much more interested in capturing real moments.”

The iconic cover shot on “Times They Are A Changin’” and Dylan waiting at the Aust Ferry terminal, during his trip from Bristol to Cardiff, which was used on the cover of Martin Scorcese’s “No Direction Home”, are also part of the exhibition.