Linkin Park Go Back To Basics For Third Album

…they’ve got über-producer Rick Rubin on board, too 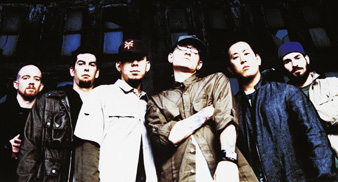 LA rockers Linkin Park have announced that they are into the mixing stages of their third studio album.

The follow-up to 2003’s hugely successful “Meteora” is as yet untitled, but the band’s co-front man Chester Bennington has been telling us what we can expect from the new material.

The album, co-produced by legend Rick Rubin – whose many credits include The Beastie Boys, The Red Hot Chili Peppers and Johnny Cash’s “American” series – is apparently going to be a much darker and calmer affair than on previous records.

“Rick has brought more of a stripped down, classic-rock and hip-hop kind of feel. We’re using vintage guitars and drums made out of wood and skin for a more tribal sound. It’s definitely not nu-metal,” said Bennington.

A new single, also not yet named, will precede the album, though dates for both have yet to be set, they are both expected in the coming months.

The Grammy award-winning band also announced this week that they will headline this year’s Download Festival, Donington Park on June 9.