The singer is bestowed with Queen's Honour by Prince of Wales 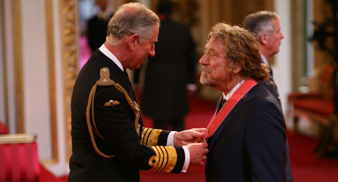 Led Zeppelin‘s Robert Plant has been awarded a CBE, in a ceremony in London on Friday (July 10).

Announced in the Queen’s New Years Honours, Plant has been honoured with a CBE at Buckingham Palace for his services to music.