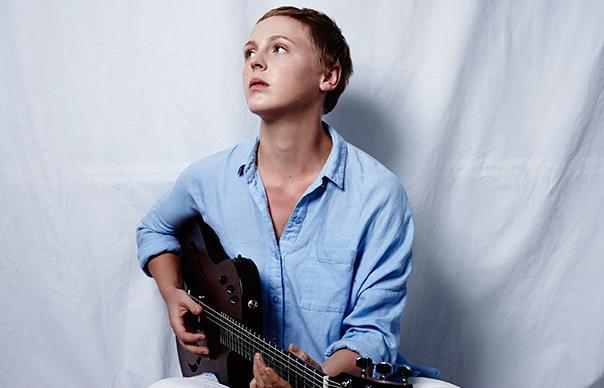 Laura Marling performed most of her forthcoming album Short Movie at a tiny London show on Saturday night.

Taking to the stage at the Silver Bullet in London’s Finsbury Park, to a packed room of around 200 people, the Berkshire-born singer songwriter began with “False Hope” from her yet-to-be-released fifth album, available on March 23.

Aside from the new material, which included “Warrior”, “Strange” and “Walk Alone”, she also played “Devil’s Spoke”, “Rambling Man”, “What He Wrote” and the title track from her 2010 second album I Speak Because I Can, a fired-up electric version of “Salinas” from her third album A Creature I Don’t Know and “Master Hunter” from 2013’s Once I Was An Eagle. She also performed ‘David’, which doesn’t feature on any of her albums, but has been an occasional part of her live set since 2013.

Her guitar tech was kept busy throughout the night, Marling swapping guitars for virtually every song, while two of the other three musicians on stage with her swapped between bass, double bass, guitar and other instruments.

Marling spoke only occasionally between songs, but was treated to a rendition of “Happy Birthday” by the crowd when she revealed it was her birthday the day after the show, although she seemed a little uncomfortable with the gesture, crouching down to take a huge swig of her drink.

She also stopped one song a second or two in because she thought she heard an audience member in the front row call her name. “Did someone call me then?” she said. “Sorry, I just get a bit paranoid because I’m wearing a skirt on stage and I bend over a lot. I always think if someone calls my name it’s a girl shouting me to tell me my skirt is up round my chest. I’m not a prude, but I don’t want to show you all my knickers.”

The subject of her clothes came up again when she took off her jumper and started to laugh. “Excuse me, I just realised my housemate is here and I’m wearing her top,” she said, to which someone in the crowd, likely her housemate, shouted “It looks great on you.”

Introducing penultimate song “Gurdjieff’s Daughter”, she said “This one needs a bit of explanation,” and went on to reveal it had been inspired by a story involving Chilean avant garde film-maker Alejandro Jodorowsky, and a four-page letter of advice on morality he received after an encounter with the daughter of influential Russian spiritual teacher George Gurdjieff.

She finished with the title track from her forthcoming album, adding “This is the last song, there’s not much else to say really. I really enjoyed myself, thank you.”