Alex Turner, Miles Kane and an orchestra to play live 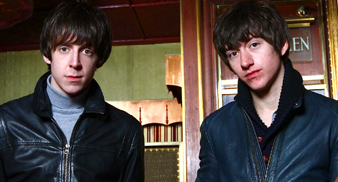 The Last Shadow Puppets have announced dates for a full tour including gigs in the UK, Europe and US.

Arctic Monkey’s frontman Alex Turner will join Miles Kane to play a series of shows including warm-ups for their multiple appearances at this year’s Reading and Leeds festival.

The pair made their festival debut at Glastonbury (June 28), performing songs from their album The Age Of The Understatement accompanied by a 16-piece orchestra.

Jack White made an unexpected guest appearance, playing on a cover of Billy Fury’s “Wondrous Place.”

The Last Shadow Puppets will play: