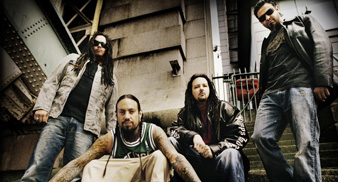 Korn have been added to this year’s Download festival bill, along with Velvet Revolver – the supergroup made up of Scott Weiland, Slash, Duff McKagan, Dave Kushner, and Matt Sorum.

Jonathan Davis says, “I am so looking forward to coming to the Download Festival this year. I was heartbroken to pull out last time. So this time I am very happy to be coming back and we promise to rock the place! I will definitely make-up for missing the last one. You can expect an amazing Korn show!”

Velvet Revolver lead singer and former Stone Temple Pilot founder; Scott Weiland said: “I have to say, I ‘m a big proponent of “the true rock and roll extravaganza.” Although I might have to add that the Download Festival might have been a better handle”.

Other acts annouced to play at the festival headlined by My Chemical Romance, Iron Maiden and Linkin Park are Grammy-nominated Lamb of God, Dragon Force, DevilDriver and last but no means least – Norwegian symphonic/melodic black metal band Dimmu Borgir.

There’s exactly 100 days left till the event – get info and tickets by clicking here for www.downloadfestival.co.uk