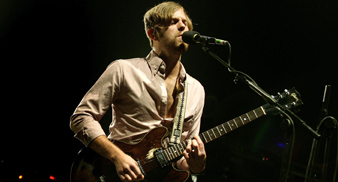 Kings of Leon warmed up for their upcoming V Festival shows with their smallest UK show this year at London’s Brixton Academy last night (August 14).

The Followill family, who headlined this year’s Glastonbury Festival and will play this weekend’s V, are also set to play a UK arena tour this Winter.

The two hour set in the intimate setting of the Academy last night saw the band give their upcoming single “Sex On Fire” it’s live UK debut, giving them one of the most impressive crowd reactions of the night.

The only other track from their from their forthcoming fourth album ‘Only By The Night’ was set opener “Crawl” – with the rest of the set mixing up their entire back catalogue.

KoL frontman Caleb Followill customarily didn’t speak between songs, but broke his silence late on, to thank the fans and to say that they felt “back home” in the UK.

Adding: “We want you guys to know that we know
we wouldn’t be where we are without you. You’re the
people who stuck with us through it all, and we’ll never
forget it.”