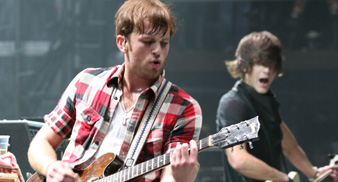 Kings of Leon will play a special one-off show at London’s Brixton Academy on August 14.

Tickets for the show go on sale tomorrow (July 4) at 9am. Fans are limited to buying two tickets each, with each one costing £27.50 + booking fee.

The band began their summer festival tour with their triumphant headline set at Glastonbury. They will play at Oxegen, T In The Park, V Festival and throughout Europe over the coming summer months.

Kings of Leon return with the release of their highly anticipated fourth album ‘Only By The Night’ on September 22.

Live dates are as follows: