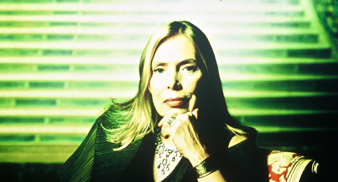 They missed out on Prince’s Planet earth, which was released via a controversial deal with the Mail On Sunday, but Starbucks’record label, hear Music, who recently released the new Paul McCartney album Memory Almost Full, are rumoured to have signed up Joni Mitchell, who is currently recording a new album, although she is at the moment unsigned.

At a London press conference, label boss Ken Lombard said Hear Music would be announcing within the next few weeks a major new adition to their repertoire – said to be “one of the all-time great female artists”.

Since we presume they are not talking about Kerry Katona, the money is on Joni – the veteran singer-songwriter is currently finishing a new album and is unsigned.

Write in if you think it’s someone else!