The rockers to play two sets at each site, they talk us through new album exclusively here 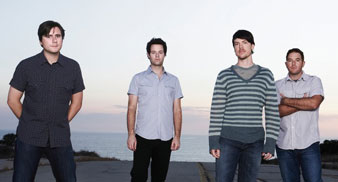 American rockers Jimmy Eat World are to showcase previously unheard tracks from their new album at this weekend’s Reading/Leeds Festival.

The band’s sixth album, ‘Chase This Light’, is to go on sale from October 15 but the Arizona quartet will be playing two gigs at Reading on Friday and twice in Leeds on Saturday. They’ll be appearing on the Main Stage during the day and headlining the Lock-Up stage in the evening.

Jimmy Eat World are the only band to be playing two sets on the same day but front-man Atkins sees the double-header of gigs as a chance for the fans to hear some of their older material.

Speaking to Uncut yesterday (August 23) shortly before going onstage to present an award at the Kerrang! Music awards last night at the Truman Brewery, Atkins said: “I think it’s just an opportunity to play some different songs”.

“I wouldn’t say it will be like the tour we did in America where it was all kinda mellow songs but there will be some totally different sets, different songs. We’ll play some older songs that maybe we wouldn’t normally play at a festival on a main stage.”

Burch said: “The record [Chase This Light] is going to be released this October so we’re going to tour around the States in late September until the rest of the year pretty much, and then early next year we hope to be Europe side.”