Jay-Z Covers Oasis On The Pyramid Stage At Glastonbury

The rapper's controversial headline slot is greeted warmly by fans 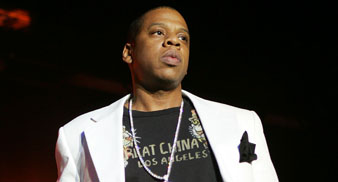 Jay-Z covered Oasis‘ “Wonderwall” as the opening track of his headline show on the Pyramid Stage at Glastonbury last night (June 28).

The rapper, whose billing at the festival had been criticised by Noel Gallagher, sang the song and played some electric guitar while the crowd sang along.

Jay-Z then went straight into his hit “99 Problems”, which his band mixed with the riff from AC/DC‘s “Back To Black”.

Speaking to the audience, the star declared: “For those who didn’t get the memo, I’m Jay-Z and I’m pretty awesome.”

It had been rumoured that Coldplay‘s Chris Martin and Jay-Z‘s wife Beyonce Knowles would join him.