The Oscar and Grammy winning soul legend has passed away, aged 65 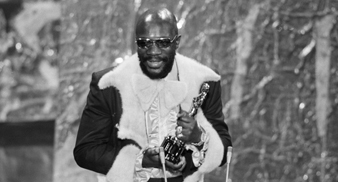 The singer songwriter who won an Academy Award (pictured above) and two Grammys in 1971 for the “Theme From Shaft” was found unconscious at his home Sunday afternoon.

The cause of death is not immediately known, though Hayes previously suffered a stro9ke in 2006.

A police spokesperson has said: “Family members believe at this point it is a medical condition that might have led to his death, adding that he was being treated for “a number of medical issues”.

Isaac Hayes started his career as a musician in 1964 at the legendary Stax Records, first as a session player for artists such as Otis Redding before beginning a co-writing partnership with David Porter producing hits which included “Soul Man.”

His successes led to his debut album Hot Buttered Soul being released in 1969.

Hayes was honoured with a place in the Rock and Roll Hall of Fame in 2002.