I Got The News! All the info on Uncut’s essential Steely Dan tribute 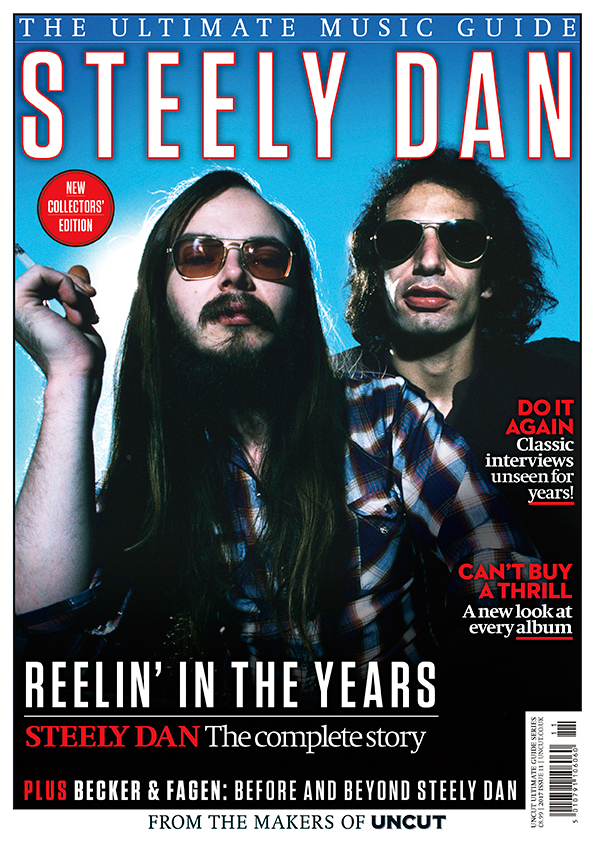 Last week, I posted a pretty ecstatic review of Steely Dan’s show at the O2 in London. This week, I’m thrilled to reveal that the latest edition of our Ultimate Music Guides is dedicated to the Dan, and to the peerless body of work assembled by Donald Fagen and Walter Becker over the last five decades.

We’re on sale in the UK on Thursday, but you can already order Ultimate Music Guide: Steely Dan from our online shop. Among other things, the issue works as a suitably effective memorial to Becker: an unrelentingly sharp mind, whose insights and wit electrified most every interview that he had to endure. Speaking to The Orillia Packet & Times recently, Fagen was clearly trying to memorialise his old sparring partner without indulging in the sort of mawkishness that Becker would have so gleefully ridiculed. “He was really hurting the last couple of years – especially the last year – but he soldiered on,” Fagen told the newspaper. “All he wanted to do was play; that was his life. It’s great that he could do it.”

“During the soundcheck, we used to consult on the setlist every night,” he continued. “And now, I feel really unprepared. I’m just trying to figure it out myself. I’ll ask some of the other players in the band, but he had a certain way of looking at it that I really miss.”

Becker, indeed, had a certain way of looking at the world that made the nine Steely Dan albums such complex, wise, hilarious documents. In a particularly revealing interview from 1976, the Melody Maker’s Michael Watts detected “a pervasive tone of cynicism” in the band’s work. “That’s an accusation to which we are not unfamiliar,” Becker admitted, with the requisite level of irony expected. He went on, though, to articulate an unflinching moral purpose behind Steely Dan’s apparent cruelties.

“I don’t think these are particularly cynical times,” he contended. “You just wait to see what’s coming up! I’m inclined to think that things are going to become far more pessimistic. Of course, pessimism and cynicism are not the same thing at all. Cynicism, I contend, is the wailing of someone who believes that things are, or should be, or could be, much, much better than they are… I suppose we are cynical by comparison to the people who are sincere, but musically I wouldn’t have it any other way.”

I found and quoted from Michael Watts’ wonderful piece when I was researching my Walter Becker obituary, and it’s a joy to reproduce the whole thing in this Ultimate Music Guide alongside many equally incisive and droll pieces from the archives of NME, Melody Maker and Uncut. They stretch from the early ‘70s, when Becker and Fagen were the pivot of a road-hardened quintet, to the 21st Century, and a more reflective – though scarcely less unforgiving – time of life. As usual, these classic interviews are complemented by extensive new reviews of every Steely Dan album, and every Becker and Fagen solo album; a catalogue that, in its jaded acuity and ceaseless pursuit of perfection, is the match for any band of the last 45 years.

“Donald and I have been moderately successful at reconciling our sense of alienation with the actual need for survival,” Becker told Barney Hoskyns, for Uncut, in 2003. “We spend most of the day planning our revenge without actually walking out into the middle of the traffic.”