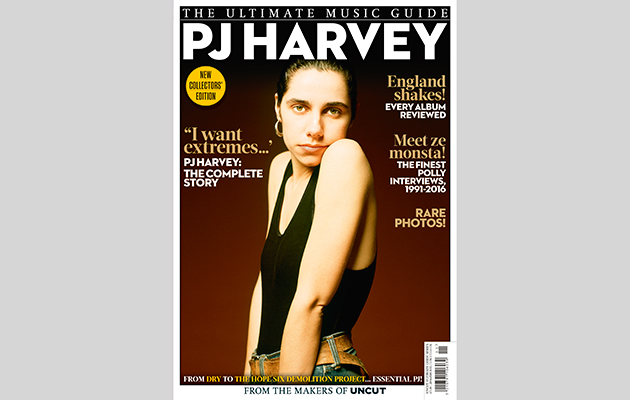 A couple of new mags that might interest you all. First up, we have a new Ultimate Music Guide on sale this week, dedicated to the genius of PJ Harvey. It arrives in UK shops on Thursday, but you can order a copy of the Ultimate Music Guide: PJ Harvey from our online shop now.

“Imagery is central to Polly,” noted a Melody Maker review of 1996’s PJ Harvey & John Parish album, Dance Hall At Louse Point. “In her small-scale, low-budget way,” the writer, Simon Price, continued, “she’s been as agile a pop chameleon as Bowie and Madonna ever were.”

Even in the wake of a phantasmagorical new image unveiled, the previous year, for To Bring You My Love, the idea of PJ Harvey as pop chameleon was not a fashionable one 20 years ago. Mostly, she was celebrated for a certain viscerality, for a frenzy of love and sex and retribution, that had writers and fans tussling over what was confessional and what was dramatic in her work, and whether the arbitrary division between the two actually mattered that much.

Twenty-five years into her career, some things can be seen more clearly. In that quarter of a century, there are very few artists whose work has been as satisfying and challenging as that of PJ Harvey, and even fewer who have embraced such a wide range of approaches and manifestations with such unerring success. In that time, her diverse music has always seemed to exist a little outside of prevailing fashion, so that it’s been hard to present Harvey as an artist tuned in to the zeitgeist. With hindsight, though, her prescience verges on the uncanny. As histories of modern music begin to be formulated, it’s a sure bet she’ll be highlighted as one of the most potent and enduring figures of the era. This Ultimate Music Guide to PJ Harvey is, hopefully, a good place to start that process. In these pages, you’ll find long-lost interviews from the pages of NME and Uncut, that reveal the fluctuating moods and modes of this remarkable performer. There are trips to a Dorset farmyard, and recollections of breakdowns in London. Tense on the road pieces in Los Angeles, and unnervingly garrulous chats about love, Nick Cave, foxhunting and haircare. In an extraordinary NME feature from 1998, she ridicules people’s perceptions of her as “Sex queen! Lady lady! In the mud! Yes! Dark! Darker still in the mud!… The labels that were attached to me during the first couple of albums seem to have stuck very solidly,” she tells Stephen Dalton. “People still tend to think of me that way, although it was a long time ago. The first two albums were very angry and direct sexually because that’s how I was then, eight years younger. But I feel like I’ve moved a long way with my songwriting now.”

In-depth new reviews of every PJ Harvey album, meanwhile, map out precisely how far she’s continued to move with her songwriting, culminating in recent years with an evolved role that incorporates elements of reportage and history; a sense of urgency and a contextualising long view perhaps unique to her generation of British songwriters.

“From album to album, I’m looking for where my heart and guts lie musically,” she admits to Victoria Segal in 2000. “It’s a process of searching, and I don’t think I’ve found it yet.”

In other news, I know some of you who’ve been collecting our History Of Rock series have been frustrated that the volumes only start with the year 1965. To be honest, the way that NME and Melody Maker wrote about music in the early ‘60s is not easy to use in compendiums like The History Of Rock, and there might be a few too many Max Bygraves interviews in there for most tastes.

Nevertheless, we have found some amazing things in these early issues, and you can find a bunch of them in a new mag we’ve put together in conjunction with NME. The NME Interviews: Best Of The 1960s (available from our online shop now) covers the whole momentous decade, but there’s some powerful early interviews with the Beatles and the Stones, with Marvin Gaye and Eddie Cochran, plus a remarkable piece that appeared in an NME of March 1960. In an American barracks just outside of Frankfurt, Sergeant Elvis Presley is preparing to leave army life behind. Through his two years of service, he has still managed to keep in touch with the world of rock’n’roll. “I’m currently away from the showbusiness,” he tells NME’s Derek Johnson. “I only have newspaper clippings to keep me up to date with what is going on.  That’s where the NME comes in very useful – I get it regularly… read it every week.”