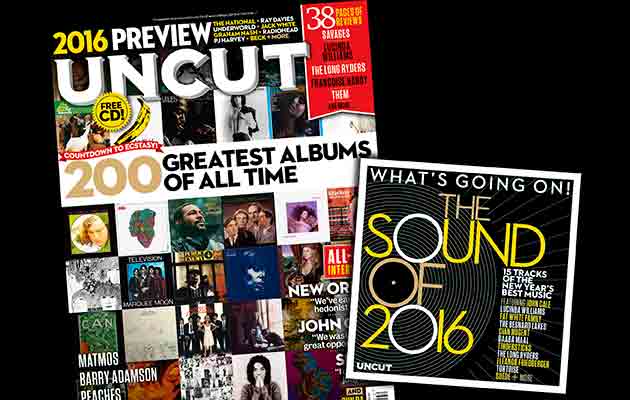 It’s traditional at this time of year to publish Best Of… lists, as we commemorate and document the highlights of the previous 12 months. Indeed, by following these handy links, you can catch up with our own Best Albums Of 2015, Best Reissues and Best Films.

Serendipitously, for the new issue of Uncut we’ve decided to unveil our list of the 200 Greatest Albums Of All Time. This is the first time in Uncut‘s 18 year history that we’ve undertaken such an ambitious project, and while I don’t want to give away any surprises about what records have – or, perhaps, haven’t – made this list, it throws into sharp relief the commendably wide and varied tastes of the electoral college: in this case, Uncut’s crack team of writers.

Anyway, all will be revealed when the issue goes on sale in UK shops and digitally from December 29.

Elsewhere in the new issue, there’s our mammoth 2016 Preview, featuring interviews with The National‘s Aaron Dessner, as he lifts the lid of his mammoth Grateful Dead covers project, Ray Davies, Graham Nash, Yoko Ono, Parquet Courts, T Bone Burnett, Underworld, Animal Collective, Chris Forsyth, Swans and many more who guide us through their new releases for the year ahead.

There’s plenty more, too – but it’s best if we keep a few surprises back until nearer the time.

I guess at this point it only leaves me to wish you a Merry Christmas from all of us here at Uncut. We can’t thank you enough for your continued support during the past year and we look forward to seeing you again in 2016 – which, incidentally, is already shaping up to be quite an exciting year for music…