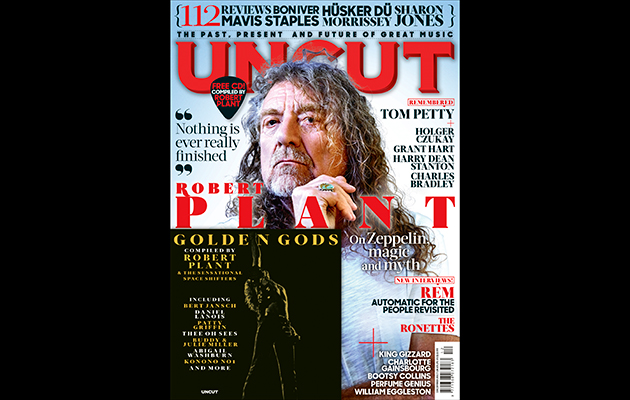 Welcome, then, to the latest edition of Uncut: issues should have made their way into UK shops by Thursday; wise and fortunate subscribers will probably have received their issues before then. Chest Of The Year 1971 turns out, of course, to be Robert Plant. At home in his local pub, Plant is, as ever, the compelling raconteur and host, as happy to discuss mortality, and his old friend John Bonham, as he is his remarkable new album, Carry Fire. He and his band have compiled our mind-expanding free CD this month, and there is also talk about The Guardian Of The Whiteleafed Oak, blue Irish comedians, Malvern folklore, and an encounter with Sonny Boy Williamson in a Birmingham toilet. Plus, intriguingly, Plant touches on his plans for the impending 50th anniversary of Led Zeppelin. Let’s “hold hands and contact the living,” he tells Michael Bonner. “What else can you do, really?”

It is easy to feel assailed by tragedies, both vast and intimate, in 2017. In this issue of Uncut, we remember at length and with love Tom Petty, Holger Czukay, Harry Dean Stanton and Charles Bradley, while our album of the month is the final astonishing testament from Sharon Jones. But there’s still plenty of room for heroes, new and old, whose unquenchable lust for life and musical adventure remains an inspiration. So meet King Gizzard & The Lizard Wizard, circumnavigate their excruciating name, and revel in the psychedelic energy that drives them to try and make five albums in a single year. Learn about Perfume Genius’ formative influences, the latest manifestation of Bon Iver, and a wealth of new music from powerful, undersung artists like James Holden, Gun Outfit and Peter Oren. More newcomers range from teenage psychedelicists Girl Ray to the venerable photographer William Eggleston, who tells us how he’s branching out into a musical career as he nears his 80th year.

What else? REM revisit Automatic For The People. Bootsy Collins talks us through his greatest albums. Ronnie Spector and her accomplices reconstruct the making of “Be My Baby”. Charlotte Gainsbourg answers your questions. And Peter Watts learns what was it like, in 1977, to be the only punk in the village, as he discovers how a city-centred musical revolution caused reverberations in the towns and suburbs beyond the greenbelts. “Punks weren’t liked,” he hears. “We stuck together. That’s why some of us have never left punk.”

Forty years ago, they wanted a riot of their own. Now you can get yours, every month, via Uncut.