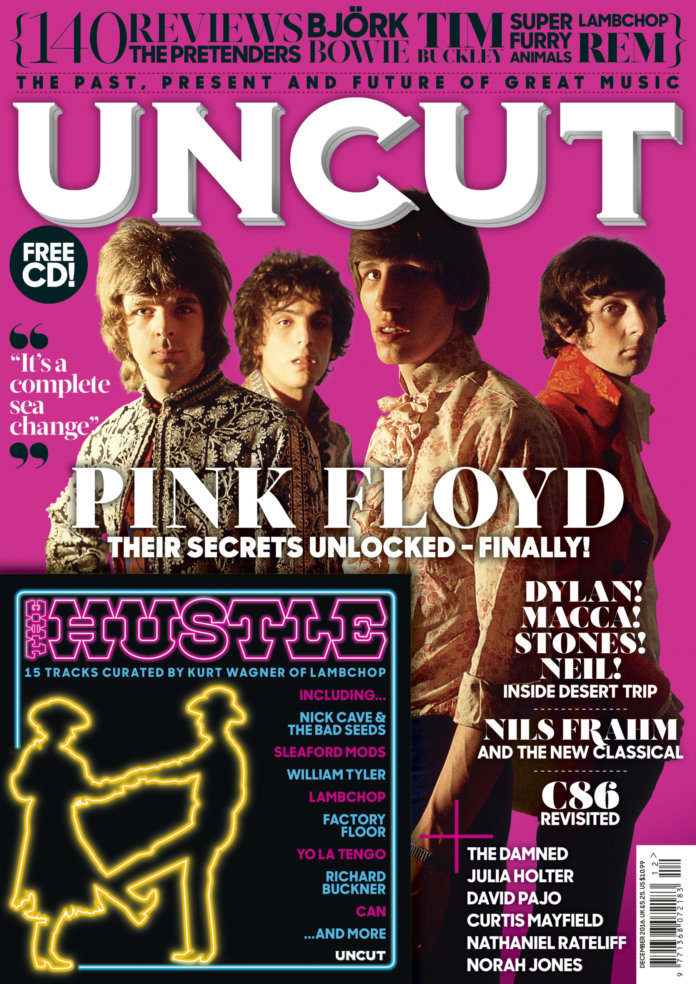 It’s probably a good job Christmas is approaching, given the valuable investments showcased in the new issue of Uncut, out today. Two gigantic boxsets provide a motherlode of long-awaited music: a 36CD set compiling Dylan’s all known live recordings from 1966; and Pink Floyd’s relatively abstemious The Early Years 1965-72, weighing in at a mere 27 discs. Together they represent a potentially shelf-breaking addition to your collection, and a significant moment in musical history, as era-defining recordings are moved out of the black economy, bootlegs of legend finally transformed into key parts of the authorised catalogue.

For Pink Floyd, in particular, it seems an auspicious month. Our cover story, constructed with the help of Nick Mason and many Floyd intimates, focuses on the unveiling of those fabled Syd-era songs that have languished for so long – officially, at least – in the band’s archive. “This boxset is a complete sea change, really,” Mason tells Tom Pinnock, “from the days when we were very careful about what we would release, to actually digging about to find old things.”

The influence of those songs is manifest elsewhere in the issue: in his piece about the British indie uprising of 30 years ago, John Robinson cites the Jesus & Mary Chain’s version of “Vegetable Man” as a critical moment in how the C86 generation repurposed psychedelia to their own ends. And later Floyd conceits are revealed to have an unlikely impact on 2016’s major players, as Rob Mitchum reviews Kanye West in Chicago, and finds “the high concept architecture of West’s show echoes The Wall for perfectly capturing an idiosyncratic artist with a complicated relationship with fame.”

Meanwhile in London, David Gilmour played a run of shows – his last, rumours persist – at the Royal Albert Hall, freighted with all kinds of poignancy: the last time he booked a season at the same venue, in 2006, Rick Wright figured in the band, and David Bowie made his last UK appearance onstage. And deep in the California wilderness, along with the most illustrious rock grandees at the first Desert Trip festival, Roger Waters proved how potent the music of Pink Floyd could still be. The flying pig from Animals might be in storage at the Victoria & Albert Museum, in readiness for next year’s Floyd exhibition, but Waters has a new one to launch: blessed with the face of Donald Trump, and inscribed with the words, “Ignorant, lying, racist, sexist pig.”

“If there was a sense of pessimism to the set,” Stephen Deusner observes in his terrific review of Desert Trip, “it might be due to the fact that Waters finds his music horrifically prescient in 2016, as England and America flirt with the kind of totalitarianism he lambasted on The Wall. It almost sounds like he’d rather his songs sound dated, consigned to the history books.”

Also this issue, you can find Wyndham Wallace’s in-depth look at the new classical movement (or whatever we decide to call it) with Nils Frahm, Max Richter, Bryce Dessner, Ólafur Arnalds, Dustin O’Halloran; Peter Watts’ somewhat less salubrious caper through the history of The Damned; an audience with Julia Holter; album by album with David Pajo; Nathaniel Rateliff & The Night Sweats; Norah Jones; the trials of Midlake; Curtis Mayfield remembered by his son; Harvey Mandel; Morphine and more.

For my own part, I’ve spent a good part of the last few weeks deep in Lambchop’s world, writing about their audacious new FLOTUS – our album of the month – and working with Kurt Wagner, who has curated the free CD that comes attached to the front of the new issue. FLOTUS is one of the most interesting records that Wagner and his shape-shifting ensemble have ever made: a gentle fusion of the band’s foundational country-soul with a very discreet brand of electronica. It finds, too, Wagner adjusting his voice with a variety of digital tools, which modernise the band’s sound without detracting from their signature grace.

FLOTUS is a project, then, which reconciles old ways with new ones. And, given how closely that chimes with Uncut’s ongoing mission, we thought it would be a nice idea to hand over curation of this month’s CD to Kurt, so that he could flesh out his eclectic vision. “It’s quite a journey,” says Kurt of his mix. Needless to say, he did us proud…