Introducing The History Of Rock: 1981 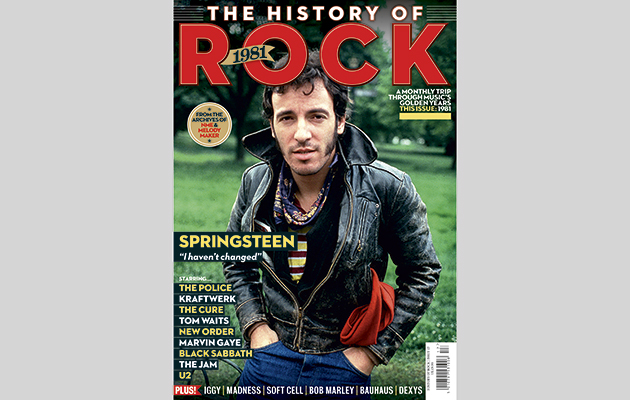 If you haven’t picked up our latest Uncut yet, the diverse pleasures of our free CD, curated by Lambchop’s Kurt Wagner, will have eluded you. Kurt’s playlist acts as a kind of primer for the bold sonic reinventions of their “FLOTUS” album, which comes out this Friday, so I thought it might be useful to post my piece about it, and my interview with Kurt, on our website a bit earlier than usual. You can read our review of Lambchop’s “FLOTUS” by clicking here.

Meanwhile, our mammoth History Of Rock reaches 1981, with the arrival of this month’s instalment in UK shops this Thursday. Bruce Springsteen is on the cover, and you can order The History Of Rock: 1981 now from our online shop. In the event you’ve missed any previous parts of this encyclopaedic endeavour, you can buy back issues of The History Of Rock from our shop, too: please note we’ve also restocked some of the earliest volumes.

Anyhow, preamble over. Here’s John Robinson with his monthly History Of Rock intro: Welcome to 1981!

“These are suspicious times, and while the world of music flourishes, it does so with a lot on its mind. In the early part of the year, New Order emerge from the ashes of Joy Division – but what sinister preoccupations, some wonder, lie behind that name? Interviewed extensively, the band Kraftwerk reveal how their obsession with computers is a rebellion against control.

“Similarly, musicians are keener than ever to articulate which side they’re on. When Oi! band the 4-Skins play a gig in an Asian community, the gig ends in a riot. Madness issue a statement about where they stand. Later, Paul Weller comes out against nuclear weapons. When ‘Ghost Town’ by The Specials reaches the top of the chart in the week of the royal wedding, it seems a particularly ironic comment on the nation’s priorities.

“Even through adversity, though, music still triumphs. From new and vibrant electronic pop, the lyrical new guitar bands from Scotland, to the passionate rock of U2, or our cover star Bruce Springsteen there’s plenty to lift the spirits.

“This is the world of The History Of Rock, a monthly magazine which follows each turn of the rock revolution. Whether in sleazy dive or huge arena, passionate and increasingly stylish contemporary reporters were there to chronicle events. This publication reaps the benefits of their understanding for the reader decades later, one year at a time. Missed one? You can find out how to rectify that here.

“In the pages of this sixteenth edition, dedicated to 1981, you will find verbatim articles from frontline staffers, filed from the thick of the action, wherever it may be. Witnesssing a taxi radio interrupt a Black Sabbath guitar solo. Talking criminal databases with Kraftwerk. Or hearing about the time Bruce Springsteen vaulted the wall into Gracelands, where the thought he saw Elvis at the window.

“Bruce thinks people may be losing the ability to dream. It’s his job, he thinks, to make sure they don’t.”