All you need to know about the latest member of the Uncut family... 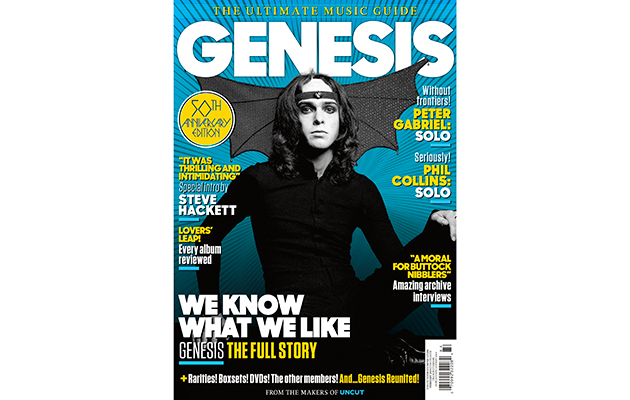 Sitting on the roof terrace of The Benjamin, a plush boutique hotel in New York’s Midtown district, Mike Rutherford and Phil Collins are contemplating the differences between Peter Gabriel-era Genesis and the band’s later incarnation. “The awkward join,” says Collins. “Can you see the join?”

It is 2014, and Rutherford and Collins are here to promote a new career-spanning box set, R-Kive. They make an odd couple: Rutherford, the reserved, urbane Old Carthusian; Collins, cheery and chatty despite the physical discomfort caused by complications from a back operation.

Could Genesis have recorded their ’80s output if Peter Gabriel had still been at the helm?

“Who’s to say?” Collins shrugs. “I think you said that there’s traces of the early band in the next three or four albums after. I talked myself into believing that there is a big difference. But if you think about things like ‘Home By The Sea’ or ‘Tonight, Tonight, Tonight’, where there are time shifts and mood shifts, would Peter have maybe instead of having the gory costumes, maybe he would have learnt to do more by insinuation and therefore done less. It wouldn’t have necessarily gone to ridiculous lengths as The Lamb Lies Down On Broadway.”

So was a massive pop album; for a while, there wasn’t much distance between Genesis and Gabriel.

“Yeah, what is the difference between ‘I Can’t Dance’ and ‘Sledgehammer’? We’ll never know.”

The unusual, labyrinthine history of Genesis – from cerebral prog shapeshifters to stadium gods – is celebrated in our latest expanded, deluxe Ultimate Music Guide, released too mark the band’s 50th anniversary. In shops from Thursday, February 14 – but available now from our online store – the bookazine features the usual mix of archive interviews from Melody Maker, NME and Uncut, plus reviews of every album and the solo careers. There’s more Phil, ore Gabriel and a special new introduction by Steve Hackett, too…

In this extract from his introduction, Hackett recalls the band’s glory years: “Supper’s Ready”, Tom Baker and his driven new bandmates. “It was like suddenly going to Eton…”

“It was thrilling and intimidating in equal measure. The band was very competitive. You have to remember, most of them had been together in some shape or form since they were 11 years old. So me joining them at 21, it was like suddenly going to Eton. It wasn’t so much house rules as them having their own language. They had their own history, pre-history… lots of reason for not doing things, it seemed.

“I would work on them like Chinese water torture to try and get my own way. Like if were were going to do something like ‘Supper’s Ready’ I said we should do it with all the sound effects so it has everything going for it. Peter Gabriel realised that he needed to personify it – and dress up accordingly, to act them, to be the lyric, to be the lyric, to be or not to be…

“‘Supper’s Ready’ was written piecemeal, but written quickly – in about two weeks, that’s half an album, working at the speed of Bach. We had an album to write, lots of gigs, recording being interrupted by gigs. We were playing on the university circuit – an earnest circuit and we were glad of it.

“The ideas of early Genesis were really clever and great. By the time we did Selling England By The Pound the band was becoming more professional, there was a growing confidence. The early records, the ideas were great but not always in time or in tune. It’s about the music, but also about the presentation.

“Pete shaved his head in the middle and wore a gold cross, but when I first met Genesis the look was much more Tom Baker: long scarves, overcoats, funny hats, borrowed trousers, policeman’s shoes. I concentrated on the music, I had forgotten you were meant to look like someone. By 1976 I was glam myself. I ditched the Polish dissident look.”