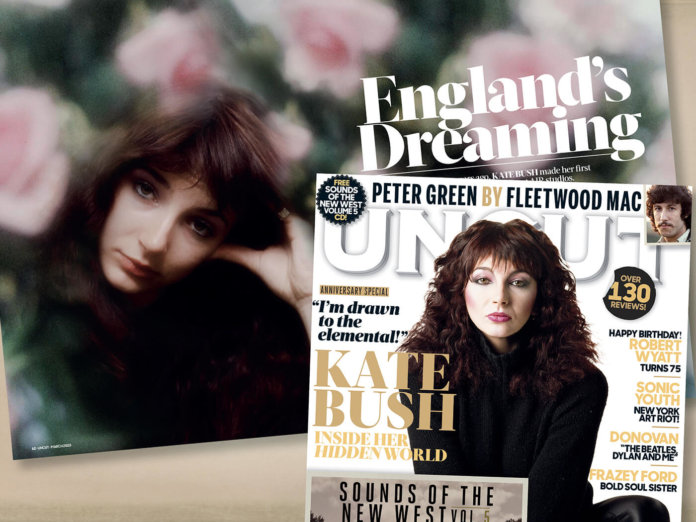 45 years ago, Kate Bush made her first professional recordings at AIR studios. To celebrate this anniversary, the new issue of Uncut features a in-depth exploration of Bush’s early years, unearthing the roots of her enduring, incandescent power.

Peter Watts speaks to many of Bush’s friends, collaborators and champions from those pre-fame years, building up an intimate portrait of a young but determined songwriter who charmed everyone she met, as well as a staggeringly original artist on the cusp of something great.

The story begins in August 1973, with Bush’s first ever recorded session at David Gilmour’s home in rural Essex. Cathy Bush – as she was then – first met Gilmour earlier that year. The guitarist had received a demo tape from a mutual friend and, intrigued, visited her parents’ house, East Wickham Farm in Welling, Kent, to hear Bush first-hand. Accompanying herself on the piano, Bush had played well enough for Gilmour to arrange this informal recording session with bassist Pat Martin and drummer Pete Perryer of the folk-rock band Unicorn. The session fee was a meatloaf made by Gilmour’s then wife, Ginger.

“Cathy was very shy,” says Martin. “She went to the piano crossed her legs as she sat down. All she had ever done was write songs in her bedroom. She’d never played with other musicians. We said, ‘Look, just play your songs. We’ll join in when we get what is going on and if you don’t like what we are doing, tell us.’ She started on the first number and you could see her grow. She went from looking down at the floor to really getting into it. She’d never experienced before what you got from playing with other musicians.”

“Scared?” Bush later admitted to Martin. “I was bricking it.”

Neither Martin nor Perryer were experienced session players, but like Bush they relaxed into the informal setting and recorded what Martin thinks was around five tracks, including “Davy” (also known as “Maybe” and “Humming”), “The Man With The Child In His Eyes” and “Passing Through Air”. Bush mostly played Wurlitzer although she moved to piano for “Passing Through Air” – later released as the B-side to “Army Dreamers”, the earliest Kate Bush recording to be released officially.

“She played them to us, then we did them a couple of times to get the arrangements but it was only one or two takes,” recalls Martin. “I didn’t think she was stunning, but the songs were interesting and the way she wrote was unusual. We didn’t need to arrange them, as that had already been done. She was really just getting off on playing with musicians. It was clear that she already had in her mind an idea of what she wanted the songs to sound like.”

Brian Bath, who later joined the KT Bush Band, remembers another auspicious early encounter. He first met Cathy Bush when he was jamming with Paddy and a 12-year-old girl burst into the room trying to hide from her violin lesson. “The family asked me over to hear Kate playing,” he says. “We were in the room at the back of the farmhouse which had all these rugs, like tigers and lions, really weird Victoriana. She was playing this most amazing music. I couldn’t work out what she was doing, so I had to go over to look at her hands. I went home and thought, ‘Hang on a minute, I need to get better.’ This was something different, another realm.”

The feature goes on to explore the influence of Bush’s artistic family, rowdy pub gigs with The KT Bush Band, the recording of The Kick Inside and that memorable Top Of The Pops performance of “Wuthering Heights”, with contributions from Roy Harper, Joe Boyd and many others who passed through Bush’s orbit in those formative years. Plus there’s a rare Q&A with Kate herself from 2011, looking back at some of her early influences and obsessions.

It’s all in the new issue of Uncut, in shops today or available to buy online by clicking here.