The Fratelli’s interpret the Marc Bolan hit for Hot Fuzz 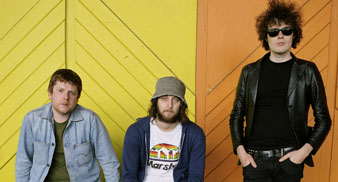 The group, who have been nominated for a Brit Award in the Best Breakthrough category, appear in glam style, recording the track specifically for the soundtrack to new film comedy Hot Fuzz.

Jon Spencer & The Elegant Too also contribute a new song called, “Here Come The Fuzz” to the film’s score, bringing up the word count of film buzzword ‘Fuzz!’

Other tracks – can you spot a theme here? – appearing in the new comedy are XTC’s “Sgt. Rocks (Is Going To Help Me) and Supergrass’ classic 1994 debut “Caught By The Fuzz.”

Hot Fuzz opens in the UK next Friday (February 16). The “Hot Fuzz:Original Soundtrack” will be available the following Monday (19).