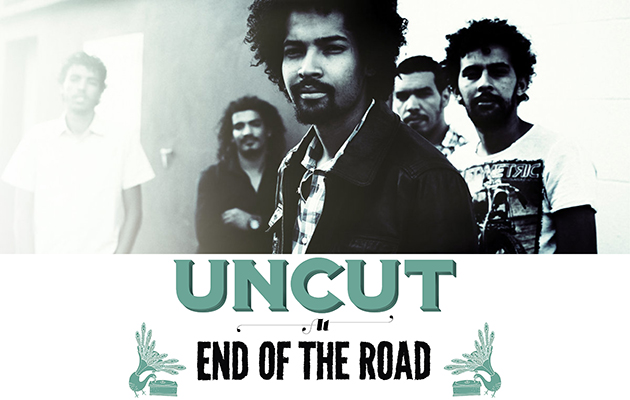 Imarhan take the Garden Stage on a warm, if unspectacular, afternoon, with the sun at least attempting to burn through the clouds. It may feel a strange setting, but these natives of Tamanrasset, in the Ahaggar Mountains of Southern Algeria, have drawn a strong crowd. Imarhan – loose translation, “the ones I care for” – are signed to City Slang. They draw on Assouf and Tuareg traditions, and as a number of the assembled watchers say audibly: “They’re quite like Tinariwen aren’t they?”

Well, yes, but Imarhan have a more obviously westernised blues and rock influences to frame their compelling, meditative, music. They’re also known to eschew desert attire for denim and leather. Today frontman Sadam is wearing traditional dress, topped off by a rather beautiful Gibson SG. The band, in crisp white T-shirts, offer a striking contrast.

From the first bars of their hypnotic, transporting  45-minute set, heads are nodding in time, and shoulders and hips are swaying with the rise and fall percussion and deep, sacred harmonies. There is dancing. Children remove their fluffy ear protectors to feel more deeply these strange and exotic new rhythms.

It’s in the guitars, the scratchy funk tones of out-of-phase wah-wah, that Imarhan show their wider palette. Song tempos shift and change with intensity. What starts as faintly reggae beat then rides on elastic shapeshifting rhythms. They’re a great, tight unit, able to speed and slow the beat at will. Four songs in, and the band go for more straight-up blues-rock, underpinned by get-you-in-the-belly percussion. The guitars at points recall the grunting riffs of ZZ Top circa Rio Grande Mud, the guitar figures, while not showy, have the mark of Hendrix upon them.

There is a lack of stage patter, unsurprisingly. We aren’t introduced to the songs, and the sole stage-side response to the crowd cheers is: “Thank You, Thank You”. It doesn’t matter: Imarhan prove that their music itself is more eloquent, and more compelling.