Muse, The Police and Arctic Monkeys scoop trophies from Vodaphone too 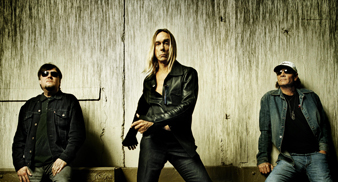 Iggy has performed riotious shows across the US and Europe with the reunited Stooges, pitting fans against security getting them to stage dive at the end of practically every set.

Arctic Monkeys added yet another prize to their burgeoning mantlepiece by picking up Best Live Act beating off competition from Kaiser Chiefs, Kasabian and last year’s winners Muse.

The band who couldn’t be at the ceremony to pick up their award as they are touring in the US sent a comic recorded video clip.

With all four members jumping over a skipping rope, frontman Alex Turner quipped that even though they’d won the mobile phone company’s award he “still can’t get a signal”.

Other winners at the ceremony at London’s Brompton Hall included Muse for Tour of the Year and The Police for Best Live Return.